Newfoundland attracts tourists for several reasons, one of which is the annual appearance of icebergs, particularly along the north-east coast, around April-May. A small town known as Ferryland (about an hour away from the main city of St. John’s), recently hit the headlines because a giant iceberg had parked itself just offshore. This year, the icebergs around St. John’s have been fairly small and not particularly photogenic, so a few days ago, when the weather had brightened up a bit and the temperature climbed to a sultry 9 degrees, a few friends and I decided to go to Ferryland and see the famous iceberg for ourselves.

One of our group has lived in Newfoundland for several years, so took on the role of navigator – and also notified us of a restaurant in Cape Broyle (a town about 10 minutes before Ferryland) that provided fish and chips, so naturally this became an integral part of our itinerary for the day.

We set off from St. John’s at about 12pm and arrived in Cape Broyle about an hour later, ready and willing to consume significant quantities of fried food, which was very tasty. I would definitely recommend the Riverside Restaurant, for anyone else headed out that direction on a similar trip.  We then drove the final 10 minutes or so to Ferryland, stopping on the way to take some photos of the pack ice that was floating in the bay. 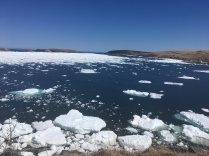 As you can see, it was a gorgeous day, with perfect, clear blue skies. We still needed hats and coats, but it was definitely warmer than it had been. On arriving at Ferryland, we discovered that the iceberg had moved further down the coast and was so far away that it barely showed up in our photos!

We planned to walk to the Ferryland lighthouse to see if the view was any better, but soon decided to head further down the coast to try and get a bit closer to it.  We drove a couple of coves further down until we reached Port Kirwan, where a helpful local told us that if we drove up a dirt track and then walked a bit, we would get very close to the iceberg. We have a normal-sized car rather than the monster trucks that you often see here, so I was slightly concerned about navigating this steep dirt track, but we made it through and parked the car at the end of the track, where it became a trail. Several other cars had also parked in the same spot and we saw several people coming back down the trail, one of whom told us that the iceberg was about 15 minutes walk away. The trail was extremely muddy – luckily none of us were wearing trainers or Ugg boots, otherwise we wouldn’t have been able to manage it without sacrificing our shoes! We weren’t really walking so much as hopping between slightly less boggy patches.

There were two points in the trail where it split into two paths. At the first split, we were lucky and chose the right path. The second time, we went the wrong way and wasted 5-10 minutes before we realised our mistake. We came upon other iceberg-hunters who had already found it and another person told us the iceberg was only 15 minutes away. Seeing as we had now been walking for about 20 minutes, the first person had already been established as a deceiver, so we had our doubts about this statement, which were confirmed when it took us about another 30 minutes to finally bring the iceberg in view. But at last we were able to get a good look at the iceberg – and it was magnificent! One of our friends informed us that she had heard this iceberg was bigger than the one that sank the Titanic!

We kept on walking till we reached the top of the hill (appropriately named Bald Head) and sat for a while, admiring the iceberg – and recovering from our hike! 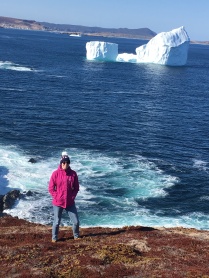 On our way back, we timed our descent and it took us about 45 minutes in total – a fact which we were careful to relay to any walkers heading up the trail who asked us how much further it was!

To round off our adventure and restore our tissues with vital nourishment, we drove back to St. John’s through Mount Pearl and got ourselves some ice-cream at (where else??) Bergs.

It was an excellent day and we definitely made the most of the good weather! If you are ever in Newfoundland during iceberg season, make sure you head out to find some, they are a pretty amazing sight! 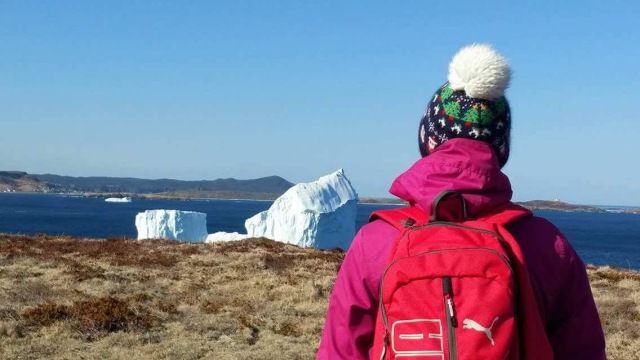