I have already written a few blogposts about my efforts to grow vegetables in our back garden and the somewhat disappointing results of my endeavours. These experiments in cultivation were particularly disappointing because I very much want to be the sort of person who effortlessly grows buckets of potatoes and carrots and things in their backyard and spends most of the year feasting on the produce. I have since come to the conclusion that this lofty goal might not be as easily attainable as I had imagined, particularly bearing in mind my almost total lack of knowledge and experience. This does not mean that I have given up, however. I still want to try and grow vegetables, even if I no longer expect anything much to come of it.

A couple of weeks ago, we attended a microgreens workshop, run by someone who has his own side business selling microgreens to local restaurants. The workshop was organised by the Tool Library, which hosts regular workshops and classes to teach people skills such as carpentry and sewing, as well as providing a lending service for DIY tools and equipment. The man who ran the workshop informed us that the two fastest growing microgreens (producing ready-to-eat leaves in 10-12 days) were peas and sunflower seeds. He provided us with trays and pea seeds to take home, so we could try growing some for ourselves. If anyone else has had similar failures with growing vegetables and is about to give up hope of ever growing anything edible for themselves, microgreens are the answer. I was astonished at the speed at which they grew, the amount of flavour packed into the leaves and the fact they needed very little assistance – a tray, some pro-mix soil, a bit of watering and sunlight was pretty much everything they required. You do have to soak the seeds for 24 hours before planting them – the ones we were given at the workshop were pre-soaked so we didn’t have to do it this time round – and you can also place them in a special cleaning solution before soaking them if you have hygiene concerns, but really, the process of growing them is for the most part extremely simple. Did I mention how fresh and delicious the microgreens taste? I don’t even like salad-y stuff that much and I was quite happy to eat them raw, with no dressing or anything.

I’ve included some photos below, so you can see how fast they grew. We actually sowed the seeds during the workshop, which was on 28th January. The man running the workshop said it would take 3 days for them to sprout and I think it probably was around 3-4 days for us. These first three photos were taken on the fifth day. 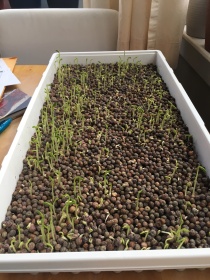 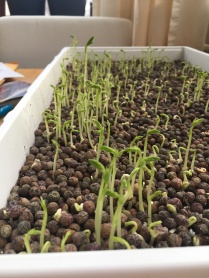 You can see they were a bit yellow to start off with, because they’d been placed on top of the fridge (the warmth aids germination), where there was less sunlight available. In two days, they’d greened up nicely! 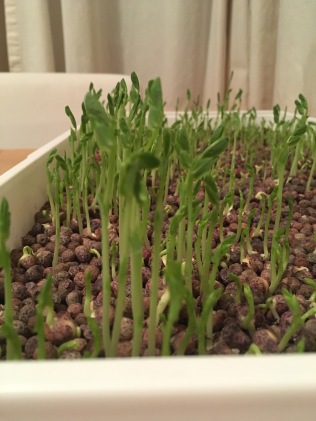 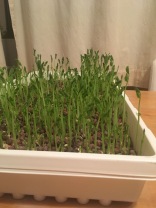 By 9th February 2018 they were almost getting too big – when they start sprouting tendrils to try and climb, you need to start eating them quick or they’ll taste too “woody”! We thought they still tasted great at this point though. 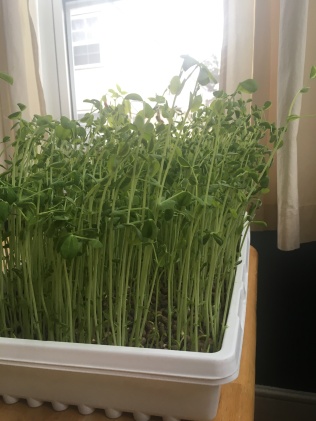 At this point, we demolished the lot over the next two days. They then started re-growing (apparently you should only let them re-grow once, because there isn’t enough energy left in the seed for them to grow again after that. If we want to grow more after this, we need to put fresh soil in the tray and start again with new seeds. I think this is something we will definitely be doing – this edible experiment, at least, has been a resounding success!

This entry was posted in Uncategorized and tagged edible experiment, grow your own, microgreens, tool library, workshop. Bookmark the permalink.