Flora & Fauna in a Local Park

I’m currently living in London and about two minutes away from my flat is the local park. I absolutely adore this place and have got into a habit of walking through it as often as possible on my way to and from the flat. The flora and fauna are just gorgeous, especially at the moment because the ducks, geese and coots have all got babies! If you know me on Facebook then you have probably seen these pictures on there, but for those who haven’t, I thought I would attempt to do a blogpost involving pictures of the park and its residents, plus commentary. No doubt this will be a highly frustrating experience, but hopefully by the end of it you will have a collection of nice pictures of baby birds and pretty flowers for you to coo over. Here goes!

Okay this one is obviously the goose family – they’re Canada geese, for those who don’t know. It was the only photo I took where you can see all the goslings together.

Eleven days later I came back and found that there were only three goslings left! I’m not sure what happened to the others, but we do have a lot of foxes round here, so it may well have been them.

They look so sweet when they’re all in a line! ❤

After munching on some grass they decided to stroll off to the water fountain and have a slurp from the puddle at the bottom. I was basically stalking them round the park at this point…I took loads of photos but these are the best.

Now I’m going to add in some pictures of the flora to be found in the park as well,  because a lot of it really is stunning and the colours are gorgeous.

If anyone knows the actual names for any of these plants, please tell me and I’ll add them in! My own horticultural knowledge is somewhat limited.

I loved the contrast between the vividly bright green of the new holly and the more sober green of the old holly underneath.

You would not even believe how long I spent trying to get a picture of a sodding bee on a flower. This was the best I could do – the little buggers kept flying away just as I tried to take the photo!

This looks rather like some gruesome long-legged insect, but it’s actually just part of the plant. At least…I hope it is! 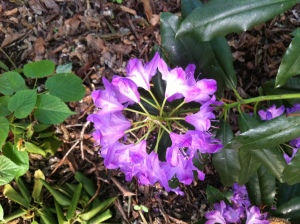 I liked the circle shape.

I think this might be my favourite flower photo. The flowers looked like they were made of silk – almost too perfect to be real. 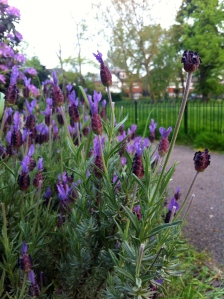 I tried to get a picture of a bee on one of these flowers for AGES – there were loads of them buzzing about but NONE of them would co-operate! In the end I just gave up and took a picture of the flowers sans insects. 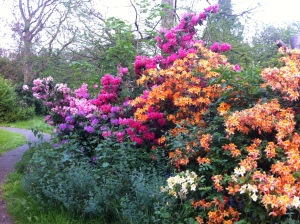 A riot of colour!

The next lot of photos was taken this afternoon. 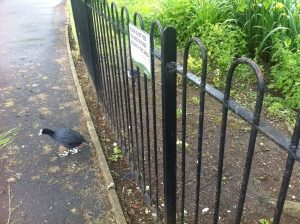 I don’t know how well you can see them in this picture but their feet are ridiculously large, the toes almost look like individual feathers! 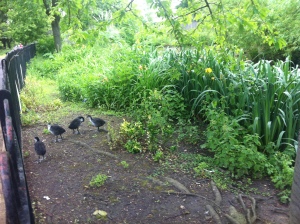 Cootlings! They’ve grown a lot since I first saw them but are still very fluffy and cute. 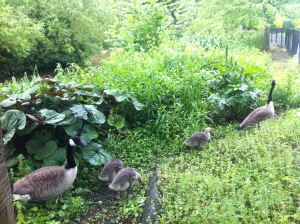 Here are the goslings again. They look much more lanky now because their legs are very long but their bodies haven’t quite caught up! Their wings are also still rather small – not much good for flying yet! 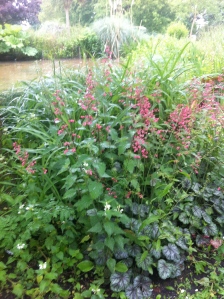 Nettles and other plants I don’t know the name of. 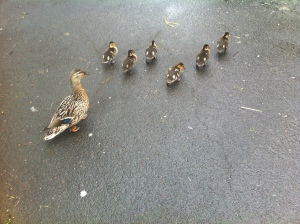 Ducklings! They are soooo sweet! I hope Mama Duck manages to keep them all safe…although when they were on the pond, she seemed to be neglecting them somewhat! One of them was miles away from its siblings, apparently oblivious to all the dangers that might threaten it. But she managed to collect them all together and seemed to be successfully herding them along later, so perhaps they’ll be alright.

Back to the goslings again, stuffing their faces with vegetation! You can just see a parental foot in the background, keeping a watchful eye on them.

This pigeon came up to me after I’d finished taking pictures of the geese and ducks and started clamouring for his own photo. Not wishing to disappoint him I asked how he’d like to position himself – perhaps a profile shot? But no, he turned around and I thought he only wanted a rear-view…

But no, he decided to perch in a manner more befitting a bird of his calibre! 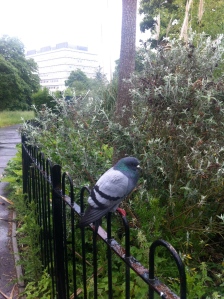 “You’re very good at this…I think you could do it professionally!” 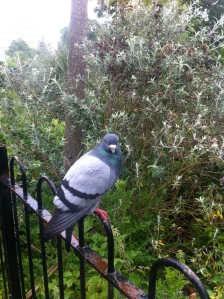 “No, really!”I think he was flattered.

4 Responses to Flora & Fauna in a Local Park