The Apple Of My Eye

I know that there will be many tribute blogs, tweets, videos, comments etc for Steve Jobs and that this post may therefore seem somewhat redundant, but I did want to write something similar to this a while ago and never properly got round to it. Now would seem an appropriate time to celebrate the life of this extraordinary man, but seeing as all I really know about him comes from my experience of using his company’s products, I will simply talk about that and leave the full obituaries and eulogies to those who knew him best. I own an iPhone4 and a Macbook Pro and although I do love my laptop, the iPhone is far and away the best thing that I have ever spent money on, for reasons which I hope to make a little clearer below.

A couple of years ago my brother asked for an iPhone 3G for his birthday. On receiving it, he naturally didn’t want the bother of having to set the thing up, so my mother and I got it out of the box and started peering at the instruction manual and trying to work out which bits did what.

On opening the box containing my brother’s iPhone 3G, I remember very clearly being stunned by how beautiful it looked. Everything about it was an utter delight – for example, the fact that the charger cable could also be used as a USB cable  – WHY hadn’t anyone thought of doing that before? It made everything so much simpler. Also the fact that the plug was so small – all my previous phone chargers had great clunking plugs that weighed a ton and looked ugly and unwieldy. And the volume control on the headphones – how did that even work? This was all before we’d actually turned the phone on – and then I was, if possible, even more impressed. All the icons on the screen were laid out in simple squares and everything was where you would expect it to be. I had found with my last few phones that if you wanted to change, for example, the ringtone volume, you had to search for what seemed like hours just to work out what section it was under.

The whole device seemed to be designed for people who just wanted to be able to USE the device, not fiddle about for hours with techno-wizardry, but just use it and be able to get the most out of it without having to refer to the manual every time they wished to change a setting. I was so pleased that someone seemed to have finally made a phone that simplified things rather than complicated them. I even remember saying that it felt as though someone (or a group of people) had sat down and thought “Now what do most people really want from a mobile phone and how can we give them that in the simplest way possible?” Rather than feeling excluded because of my techno-ignorance, I felt included because it felt as though someone had tailored it to my needs. I know that Apple have had some stick for pandering to the lowest common denominator, as it were, but I suspect that the people who say that are also those who are slightly sneering and snobbish about their own technological elitism. And I bet they don’t have as much fun with technology either.

Even after falling in love with the iPhone, I did read reviews of all the other latest phone releases before deciding a few months later when my contract finished that I definitely still wanted one. Some of the other phones were quite impressive – Blackberry was apparently a very popular choice. But I feel that Blackberrys were designed for businessmen, for people who go to conferences every week and drink champagne at corporate events in their Armani suits – and even the thought of having to wear a suit to work every day makes me shudder. The iPhone is so attractive because it seems to be designed for fun, for people who like playing games and downloading the most pointless apps imaginable just because their utter absurdity amuses you.

Ah yes, the apps. The add-on applications that mean each phone is customisable to the individual preferences of the owner. Some people have dozens of games, others have all the news apps so they can keep track of current affairs, some have lots of photography and arty apps…the possibilities are endless. Only two weeks ago I was getting ridiculously emotional over the StarWalk app which I was using for the first time. I am still in awe of the fact that modern technology allows me to point my phone at a constellation in the night sky and have it tell me not only what the constellation is, but also then give me all the information about that star cluster that I could ever wish to know. This reminds me of something Arthur C. Clarke, the famous science-fiction writer, once said, which perfectly describes how I feel about much of today’s technology:

“Any sufficiently advanced technology is indistinguishable from magic.”

I know that there are many perfectly valid criticisms of Apple products – the fact that they aren’t – or don’t use – open source (I think that’s the right term), the frustratingly short lifespan of their headphones (and to some extent the charger cables too), the fact that you can’t use Flash when almost every other non-Apple device can….but I am prepared to forgive them all of that because their products are beautiful. They have style, they are so effortlessly cool. They look shiny and pretty and they can be used for almost anything – music, emails, games, study etc, thus fitting the two main requirements of the interior designer William Morris:

“Have nothing in your homes that you do not know to be useful or believe to be beautiful.”

Steve Jobs also said this about design, which I think explains a lot about why Apple’s products look so good:

“In most people’s vocabularies, design means veneer. It’s interior decorating. It’s the fabric of the curtains of the sofa. But to me, nothing could be further from the meaning of design. Design is the fundamental soul of a human-made creation that ends up expressing itself in successive outer layers of the product or service.”

Thank you Steve – and indeed everyone at Apple -for making the wonders of technology more accessible to everyone – and for making it more beautiful too. 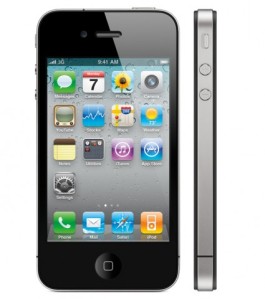 “We made the buttons on the screen look so good you’ll want to lick ’em.”

2 Responses to The Apple Of My Eye